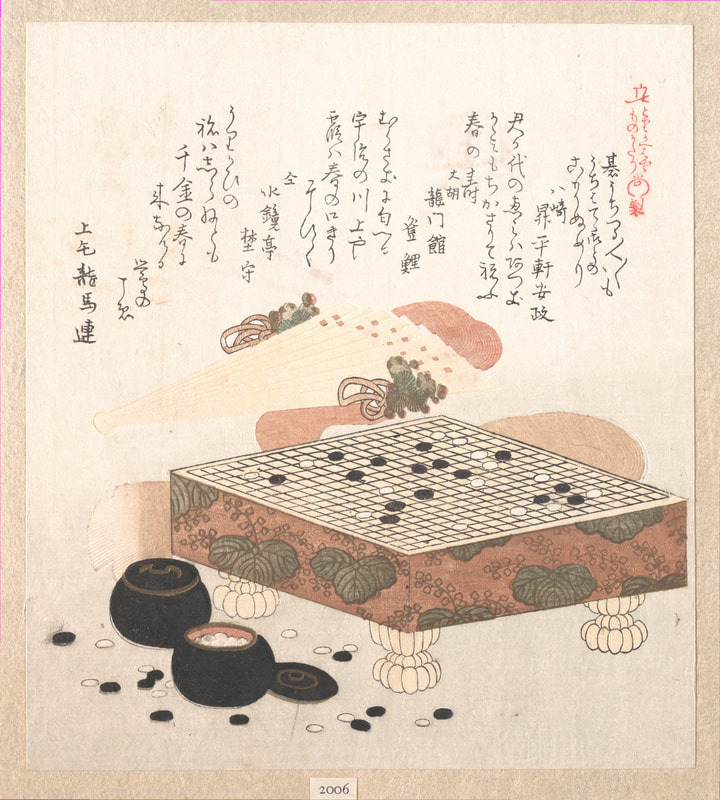 Go is one of the oldest strategy games in world cultures, with evidence that it was being played 2,000 years before the Common Era (BCE), or about 4,000 years ago. Today, it is an extremely popular game in China, Korea, and Japan.

The rules are famously simple: two players alternate placing black and white stones on a board, starting with the black player. The goal is to control as much of the board as possible with your own stones. Despite the simplicity of the rules, the wide variety of possible move combinations brings players back to the game again and again.
​

​A Go board (goban) is a square grid. Stones go on the intersections, not inside the squares. The standard goban is 19 × 19, but sometimes players use smaller boards for quicker, more focused games.

​The most popular smaller options are 9 × 9 and 13 × 13 boards. The size refers to the number of intersections on the board, not the number of squares. 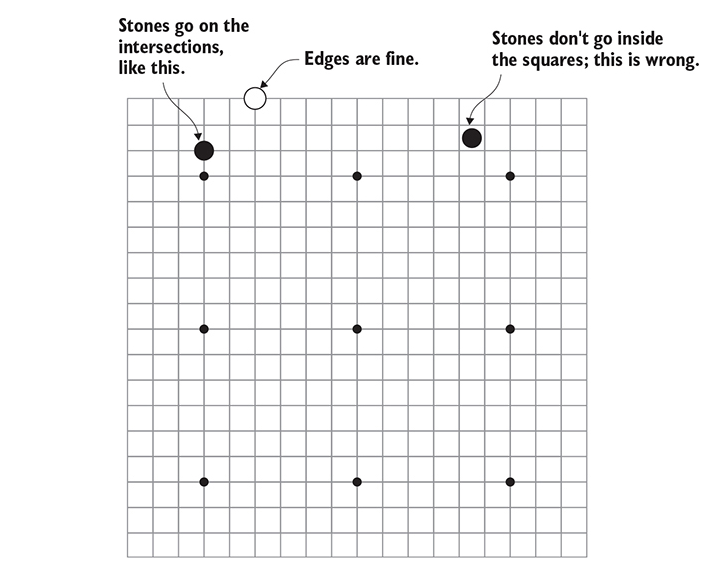 ​Nine points are marked with a dot on full-sized boards. These points are called the star points. Their main purpose is to help players judge distances on the board; they have no effect on game play.

One player plays with black stones, and the other plays with white stones. The two players alternate placing stones on the board, starting with black stones. Stones don’t move after they’re on the board, although they can be captured and removed entirely. To capture your opponent’s stones, you must completely surround them with your own.
​
Stones of the same color that are touching are considered connected. For the purposes of connection, we consider only straight up, down, left, or right; diagonals don’t count. Any empty point touching a connected group is called a liberty of that group. Every group needs at least one liberty to stay on the board. You can capture your opponent’s stones by filling their liberties. 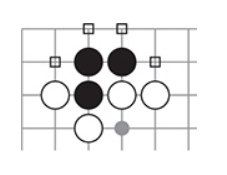 The three black stones are connected. They have four liberties on the points marked with squares. White can capture the black stones by placing white stones on all the liberties.
​
​When you place a stone so there is only one liberty remaining for a group, the group is in atari.  When two players are playing to learn, they often announce the atari  so the other player will understand their group can be captured on the next turn if they take no action.  When the last liberty of an opponent’s group is filled, that group is captured and removed from the board. The newly empty points are then available for either player to play on (so long as the move is legal).

You may not play a stone that would have zero liberties, unless you’re completing a capture.

The Eyes Have It

An interesting consequence arises from the capturing rules. If a group of stones has two completely separate internal liberties, it can never be captured.

Black can’t play at A, because that black stone would have no liberties and its placement wouldn’t complete a capture because of the remaining liberty at B. Nor can black play at B, for the same reason. So black has no way to fill the last two liberties of the white group. These internal liberties are called eyes. In contrast, black can play at C to capture five white stones, because even though that black stone would have no liberties, it completes the capture. That white group has only one eye and is doomed to get captured at some point.
​

To ensure that the game ends, it’s illegal to play a move that will return the board to a previous state.  This situation is called ko, from the Japanese word for eternity. 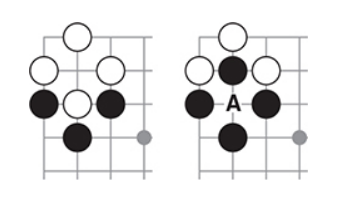 In the diagram, black has just captured one stone. White might like to play at the point marked A to recapture the new black stone. But that would put the board back in the same position it was in two moves ago.

Instead, white must play somewhere else on the board first. After that, if white captures at A, the global board position is different, so it’s legal. Of course, this gives black the opportunity to protect the vulnerable stone. In order to recapture the black stone, the white player must create a distraction big enough to draw black’s attention elsewhere on the board.
​

​Ending the game, counting, and komi

A game can end in one more way. Either player can resign at any point, or both players can pass during their turn.

​In a game between experienced players, it’s considered courteous to resign when you’re clearly behind.
Either player may pass any turn instead of placing a stone. When both players pass consecutive turns, the game is over.

Before scoring, the players identify any dead stones: stones that have no chance of making two eyes or connecting up to friendly stones. Dead stones are treated exactly the same as captures when scoring the game. If a disagreement occurs, the players can resolve it by resuming play. But this is rare: if the status of any group is unclear, players usually try to resolve it before passing.

The goal of the game is to control a larger section of the board than your opponent. There are two ways to add up the score, but they nearly always give the same result.

Territory: The most common counting method is territory scoring. In this case, you get one point for every point on the board that’s completely surrounded by your own stones, plus one point for every opponent’s stone that you captured. The player with more points is the winner.

Area: An alternative counting method is area scoring. With area scoring, you get one point for every point of territory, plus another point for every stone you have on the board. Except in rare cases, you’ll get the same winner by either method: if neither player passes early, the difference in captures will equal the difference in stones on the board.

Territory scoring is more common in casual face-to-face play, but it turns out that area scoring is slightly more convenient for online or computer play. 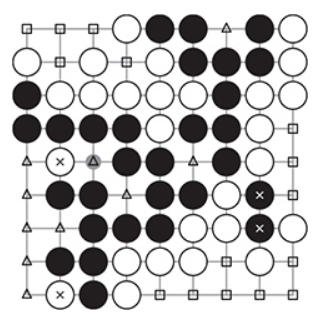 Here’s how you score this game:


​By either counting method, white wins by 10.5 points.

When two players of unequal strength play, a simple system keeps the game interesting. The weaker player takes black and gets to place a few stones on the board before the game starts; these stones are called handicap stones. Then the stronger player takes white and makes the first move.

In a handicap game, komi is usually reduced to just half a point. Normally, the purpose of komi is to negate the advantage a player gets from playing first; but the point of a handicap is to give black an extra advantage, so the two would work at cross purposes. The remaining half point of komi is just to break ties.

It’s traditional to place the handicap stones on the star points, but some players allow the black player to choose where to put them.
​ 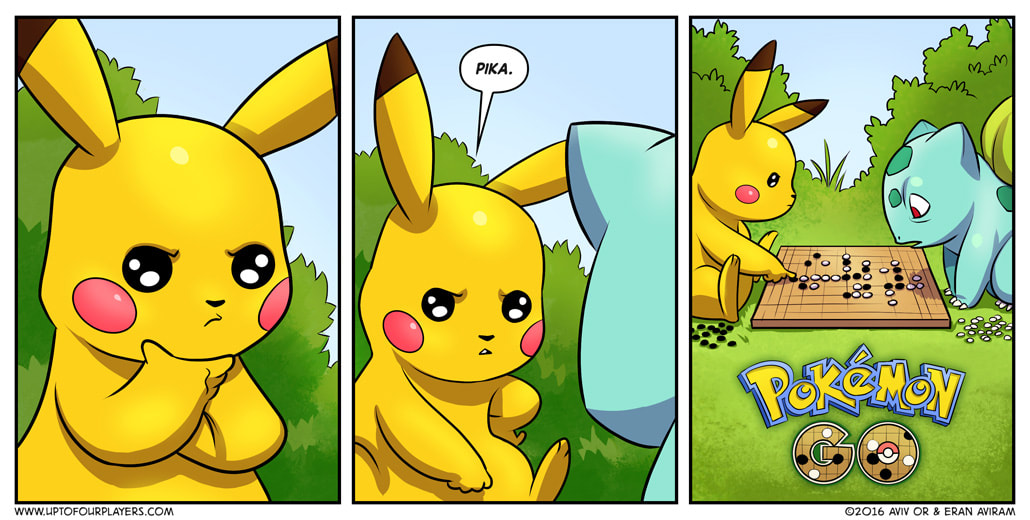