Narrative writing, the type we use for storytelling or to communicate experience, has a shape different from the expository column.  The narrative "diamond" serves as a guide to a fully-elaborated story, helps young writers recognize the "shape" of the stories they read for pleasure and school assignments, and reminds students of skills they'll need to apply to write successful narratives of their own. 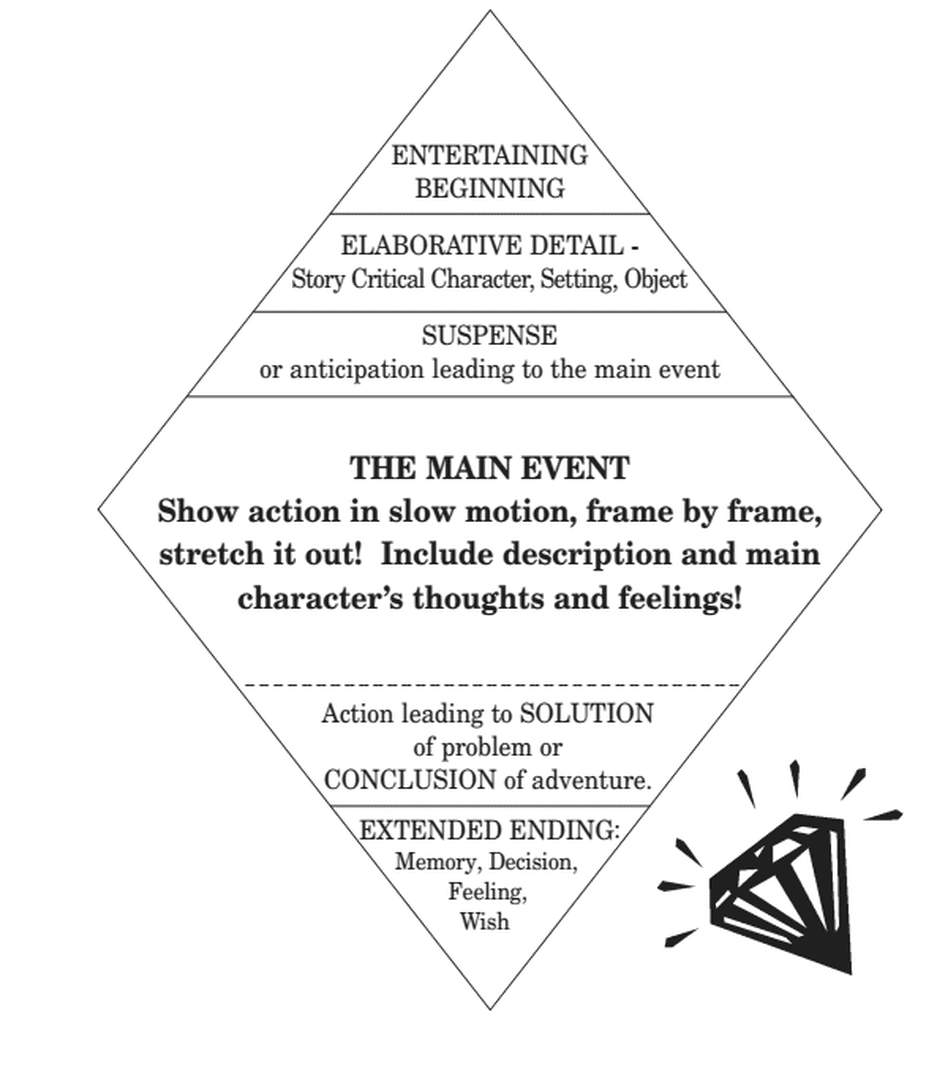 The diagram is proportional to the amount of time and text writers spend on each element of the narrative.  The best writers only spend effort describing important details with "just right" words, focus most of the writing on the page on the main event at the heart of the story, and end the story with a strong emotion.  Narrative writing communicates feelings and experiences powerfully when all the elements work together.

Begin your story as close to the main event as possible.

For example, if it’s a story about being marooned on a tropical island, don’t begin the story two weeks before you leave, reading through travel brochures. Begin on or near the island.

If you’re writing about a day at the beach, don’t begin waking up, getting dressed, and having breakfast--begin at the beach! Get right into the action so that you don’t lose your readers.

AN ACTION - Put your main character in your setting doing something interesting and relevant to the story.

DIALOGUE - Have your main character say something.

A THOUGHT OR QUESTION - Show the main character’s thoughts, or raise a story question.

A SOUND - Grab the reader’s attention through the use of a sound.

Elaborative segments allows the reader to see story objects or events through the five senses of the characters. The vivid word choice and specific detail not only make for an interesting paragraph, but become powerful tools for building writer and reader vocabulary.

Developing writers often start out with strong, specific details using colorful adjectives and well-chosen verbs, but then exhaust themselves by the time they reach the middle of the story. The key is to keep most descriptions brief except for those characters, objects, and settings that will be important later in the story.
​QUESTIONS ABOUT A CHARACTER -

QUESTIONS ABOUT A SETTING -

QUESTIONS TO ASK ABOUT AN OBJECT -

• What color was it?
• What did it feel like?
• What was its shape?
• What size was it?
• How old was it?
• What was it made of?
• What did it smell like?
• What kind of sound did it make?
• How heavy was it?
• Who did it belong to?
• Where did it come from?
• What did it remind you of?
Showing emotion instead of telling about it is a difficult skill for developing writers. However, even a young writer with limited experience can recognize outward and visible signs of strong emotions when they are described well. Read the description lists below that SHOW emotion on the right and match them to the emoji images and the TELLING labels on the left: 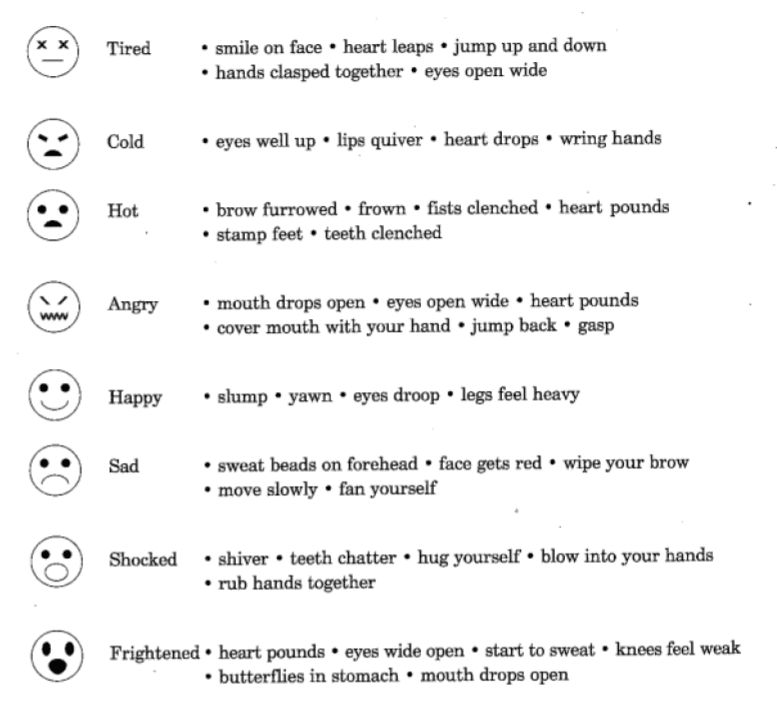 A sense of suspense and anticipation raises questions in the reader’s mind. If the characters are wondering or worrying, so is the reader! The reader is so eager, anxious or involved that they feel compelled to read on to relieve the worry, fulfill the wonder, and answer the questions.
Suspense, contrary to what people often think, does not have to be scary. It certainly can be, as readers love to be frightened (a powerful entertainment tool). But, another way to look at suspense is as story tension or a sense of anticipation.
Story Questions can be raised directly or indirectly. The simplest way (directly) is to have your main character raise a question - to wonder or worry. In turn, the reader wonders and worries as well. The indirect approach involves telling the reader only part of what is going on–just a hint. This raises questions in the readers’ mind and compels them to read on.

Word Referents describe a story critical character or object without naming it. tease the reader by not immediately revealing what “it” is.

The Magic of 3 technique involves the convention in which a series of three sensory hints (involving any of the senses) are provided in a way that builds tension - the third hint leading directly to a revelation.

When building suspense, and particularly when using the Magic of Three, authors use words and phrases to grab the readers’ attention, to alert the reader to the fact that something significant is about to happen:
Suddenly . . .
Just then . . .
All of a sudden . . .
A moment later . . .
In the blink of an eye . . .
Without warning . . .
The next thing I knew . . .
Instantly . . .
To my surprise . . .

A successful narrative opens with an entertaining beginning that "hooks" the reader into being immersed in the characters, settings, and action. The story should continue to build up in cause-and-effect progression to the MAIN EVENT. The adventure, problem, or experience will change the character in some way.
Because the main event is the central story experience, this part should take up more space on the page or screen than other segments of the story. Many times, it seems developing writers rush through the main event when the best way to engage readers is to slow down--

ACTION: What did you do? (Tell it in slow motion!)

DESCRIPTION: What did you see, hear, feel?

THOUGHTS/FEELINGS: What were you wondering, worrying, feeling?

DIALOGUE/EXCLAMATION: What did you say or exclaim?

SOUND EFFECT: What did you hear?

In every story the main character experiences something significant--solved a problem, learned to live in a new setting, shared a new relationship, learned a new skill, or had an adventure of some kind. The solution or conclusion of the main event occurs when the character recognizes the experience or change; sometimes, the main character needs a supporting character to point it out to him or her.

Once the main character has recognized the change he or she has undergone or the lesson he or she has learned, the story begins to wind down. While readers usually do not want a long, drawn-out ending after the solution to the main event occurs, neither do they want it to end too abruptly. Developing writers struggle to keep the ending from being too short or too long. A "just right" ending shows the change in the main character as a result of the main event and its solution--the reader has invested energy and time in getting involved in the story, so the writer needs to provide a continued connection while closing the story.

A MEMORY: What did you remember most about the sequence of events?

FEELINGS: How did you feel about what happened?

WISH or HOPE: What would you wish or hope for the future?

DECISION: What did you decide?

​DEFINING ACTION: What did you decide to do next with your new experience, knowledge, skill, or relationship? 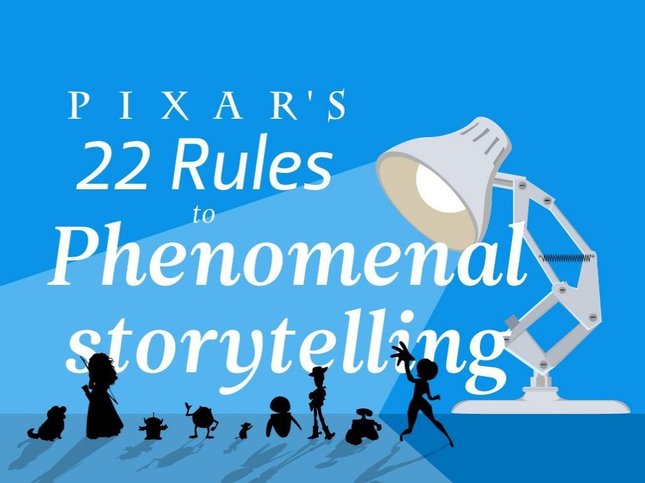 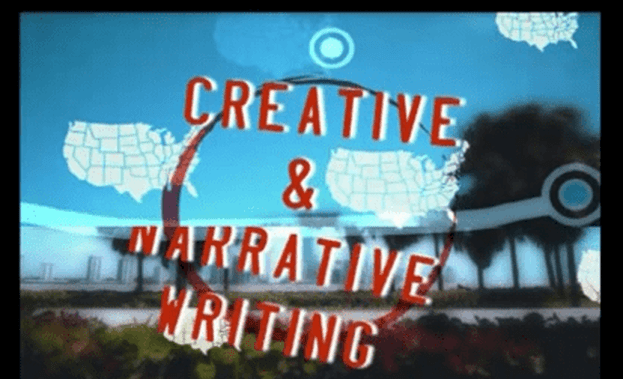 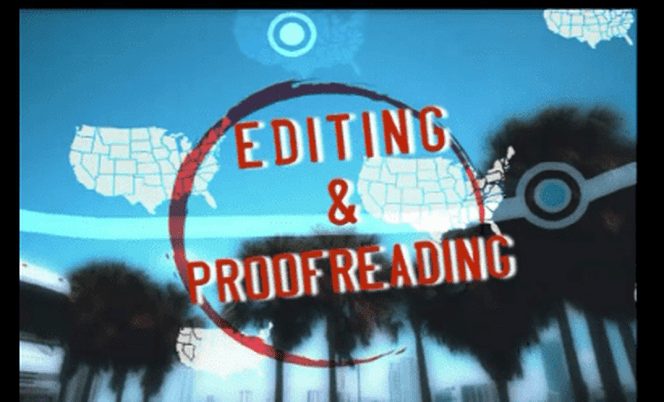